A Solar Photovoltaic Station with 5 MW Projected Capacity to Be Constructed in Talin
The station will be located in the 8-hectare area owned by "Dizapayt" LLC, which was previously used as a pasture

Arabic "Masdar" Company Recognized as Winner of Industrial-scale 200 MW Capacity Solar Station Construction Contest
In the international tender announced by the Armenian government, Masdar initially offered a tariff of 0.0299 USD per kWh. During the tender stage, the company offered a final tariff of 0.0290 USD per kWh

Government Granted Privileges to Companies Building Solar Stations in Astghadzor and Aragatsotn
By RA Government Resolutions № 909 - A and № 907 - A dated on June 3, 2021, "Bari Arev" and "AS Energy" LLC received privileges to import the necessary equipment and goods for the construction of solar stations 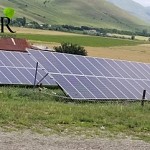 Whether Aragatsotn Village Ready to Protect Itself from Nuclear Danger?
In case of radiation danger, the basement of the house of culture and the basements designed for residents’ personal use can serve as anti-radiation shelters

Items Protecting from Radiation Danger on Paper: Problems in Nor Amanos
The community does not have a functionally adapted anti-radiation shelter in case of radiation danger

Ombudsman: SHPP Problem To Be Subject To Systematic Examination, Supervision Over SHPPs To Be Enhanced
In the report, the Human Rights Defender recorded the complaints received during 2019