Yerevan Mayor: "No Green Zone Will Serve Other Purposes Under My Rule" 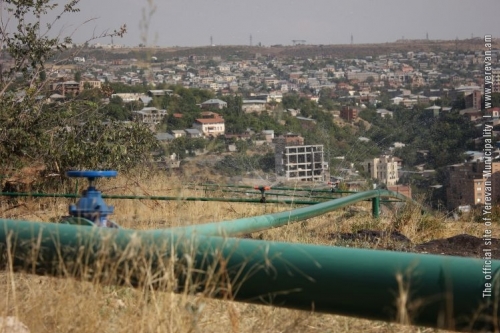 “No green area will be yielded any more. All green areas which are not used with other purposes are to be preserved. I promise to do my best to preserve all remained green areas and turn the land plots into green areas wherever possible. This is the policy we have adopted and will follow it. Green areas are our lungs, the healthy life of our children. We have no right to lose even a millimeter of green areas”, Yerevan Mayor Hayk Marutyan stated during his working visit to get acquainted with the works conducted in greening sector.

A number of land plots illegally occupied in the area of the park after Tatul Krpeyan have been returned to the community. Totally, next year it is planned to plant trees in the area of 10 hectares and to build the alley which will reach the Zoological garden. Due to the new deep wells it will become possible to irrigate the area adjacent to St. Sargis church in Nor Nork which is now completely neglected. In Nor Nork the Mayor visited the Revival park which is managed by the Armenian Apostolic Church. The possibility of improvement of the area jointly with the church was discussed.

“The irrigation system of Yerevan is of 400 km length of which only 90 km works properly. Mayor Marutyan was reported that by the end of the current year nearly 17.000 linear meters of irrigation network will have been installed in the capital. 7000 of it has already been operated. 7 pump stations have been renovated, 3 more ones are being modernized. A new irrigation system is being installed to restore the forest zones of Tsitsernakaberd and Saralanji (approximate surface is 12 hectares). This year’s program also includes drilling of deep wells. “The main problem is water. Water supply is frequently not enough or is distributed with rather long intervals, so deep wells are vital. We will try to attract grants working with our international partners so as to solve that problem. This way we will have independent water resources”, stressed Hayk Marutyan.

Violation in "Voghji-2" and "Voghji-3" SHPPs: Fine Amounted to 200,000 AMD
Astghadzor Residents Filed Complaint to RA Chief Prosecutor on Inactions of Martuni Prosecutor's Office and Police
Violation in Argitchi SHPP: Damage of 168,840 AMD Caused to Environment
30 Buildings To Be Dismantled in Littoral Area of Lake Sevan
Whether Argitchi SHPP Operates in August?