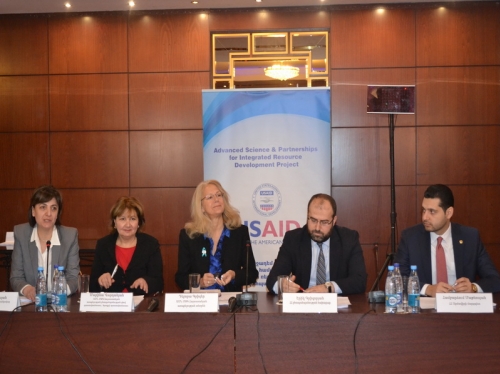 The world is marking World Water Day on 22 March. The theme for this year is '‘Leaving no one behind’, which aims to unite everybody's efforts to make water accessible for all. The Advanced Science and Partnerships for Integrated Resource Development (ASPIRED) project marked this World Water Day through a public event, presenting the project’s mid-term accomplishments. The target regions have been selected – Ararat and Armavir. This project is funded by the USAID. Based on USAID’s assessment, the uncontrolled use of artesian water has shrunk the groundwater basin by almost 10 meters on average.  More than 30 communities of Ararat and Armavir provinces currently face problems with drinking or irrigation water supply,' ASPIRED project leader Magda Avetisyan presented.

'In the first stage, 2800 wells have been registered, as well as 235 farms. The USAID ASPIRED project  helped preserve 9.2 million cubic meters of precious groundwater in the Ararat Valley.' Magda Avetisyan said.

In addition, ASPIRED has completed four water saving projects.  The project has introduced the concept of secondary use of fish-farm water for irrigation needs in Hayanist and Sayat-Nova communities, returning 100 hectares of abandoned community farmlands back to cultivation and creating income-generating opportunities for 183 households.

The drinking water pipeline system in Aratashen and Yeghegnut communities in Armavir Region have been improved, a new pumping station has been constructed. At the same time, the community water network is being changed in order to reduce loss of water.