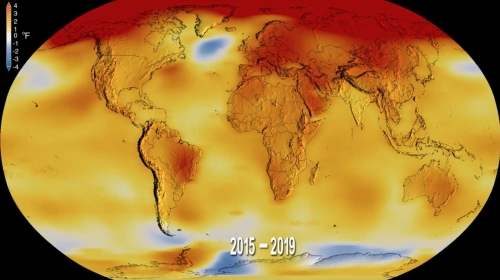 “The average global temperature has risen by about 1.1°C since the pre-industrial era and ocean heat content is at a record level,” said WMO Secretary-General Petteri Taalas.

“On the current path of carbon dioxide emissions, we are heading towards a temperature increase of 3 to 5 degrees Celsius by the end of century.”

Only 2016 was hotter, due to a very strong El Niño which causes warming, combined with long-term climate change.

Furthermore, average temperatures for the past five years and 10 years, respectively, were the highest on record.

Since the 1980s, each decade has been warmer than the previous one: a trend the UN agency expects will continue due to the record level of greenhouse gases in the atmosphere.

WMO added that 2019 and the past decade also were characterized by retreating ice, record sea levels, increasing ocean heat and acidification, and extreme weather, all of which have “major impacts” on human health and the natural environment.

Meanwhile, the New Year began where 2019 left off, according to Mr. Taalas.

“Australia had its hottest, driest year on record in 2019, setting the scene for the massive bushfires which were so devastating to people and property, wildlife, ecosystems and the environment,” he said.

“Unfortunately, we expect to see much extreme weather throughout 2020 and the coming decades, fuelled by record levels of heat-trapping greenhouse gases in the atmosphere.”