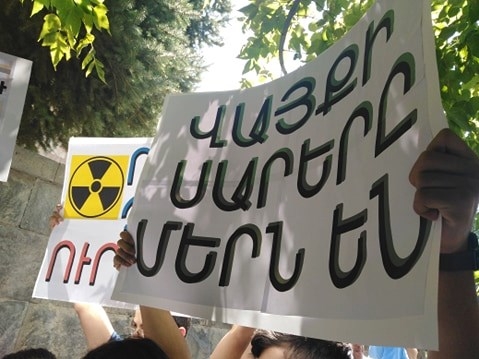 Today, on September 3, the residents of Vayk community in Vayots Dzor Region boycotted the public hearings of Vayk Gold LLC and rejected the open-pit application of Azatek gold polymetallic mine in the administrative areas of Vayk and Zaritap communities.The residents holding posters with the slogans "Vayk mountains are ours", "We will not let our health be in danger", "We are Vayk gold" held a protest in front of the municipality building, then organized a signature collection to hand in the petition to RA Prime Minister Nikol Pashinyan, this is what "Vayk" InfoTun reports."Vayk residents have gathered near the municipality not to allow mine representatives to enter the municipality, arguing that they had nothing to discuss or bargain with and that Vayk would not become a mine. The petition signing process started addressed to the Prime Minister and Vayk community head joined hundreds of Vayk residents.”According to the press release posted on the website of the Vayk Municipality, the first phase of the hearings in line with RA Law on Environmental Impact Assessment and Expertise were scheduled today.It should be noted that in November 2018, the Prosecutor General's Office of Armenia initiated a criminal case on the grounds of illegal mining of gold, silver and copper by Vayk Gold LLC from Azatek mine in Vayots Dzor Region in the amount of 250 million AMD.

At that time the Nature Protection and Soil Inspection had stopped mining operations and applied to the RA Ministry of Energy and Natural Resources with the request to deprive Vayk Gold LLC of the right to use the subsoil.

License of Security Company Hired by Lydian Armenia Suspended
Teghout Residents To Be Employed: “Teghout” CJSC Accepted Their Demand
Teghout Residents Again Blocked Road Demanding Jobs
Why Mghart Mining Was Stopped and What Are Mghart Residents’ Expectations from Soil Manager
Teghout Residents Demand On Being Employed in Teghout Mine To Be Fulfilled