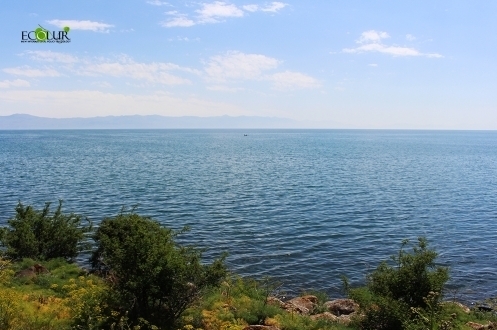 Forecasts on the ecological condition of Lake Sevan in the 4th National Climate Change Report of the Republic of Armenia are not optimistic. Climate change scenarios are expected to have a negative impact on the biological conditions of the lake: in case of a pessimistic scenario, the total river inflow to Lake Sevan will decrease by about 34% or 265 million cubic meters with respect to the base period (1961-1990) by 2100.

Evaporation will increase in line with river flow decrease forecasts. According to the report, it is expected that the water temperature of the lake will increase by 2 degrees in 2070 and by 4 degrees in 2100. Temperature rise will have a negative effect on Salmonidae (salmon) species, which may eventually disappear,” the report says.

High water temperatures are preferred for Cyprinidae species. "It is very likely that Lake Sevan will turn from a trout reservoir into a carp reservoir. In addition, rising lake water temperatures and massive development of blue-green algae during the summer (due to "water blossoming") can lead to even deeper changes in ecosystems.

According to the forecasts, if appropriate measures are not taken, such phenomena will be repeated and contribute to significant changes in the ecological factors affecting the biodiversity of the lake. In particular, the processes of eutrophication will accelerate, water composition will change and pollution will take place in parallel with quality deterioration, phyto-zooplankton and benthos changes, accumulation of toxic substances in living organisms etc.," the report says.

In order to prevent the mentioned phenomena, the report suggests:

• To improve the legal and institutional framework for the preservation of Lake Sevan ecosystem (amend RA Law on Lake Sevan taking into account the projected CC effects),

• To maintain the trend of lake level rise to at least the projected level read or implement measures to stabilize the current level,

• To minimize pollution of Lake Sevan with communal wastewater, such as with wastewater from the coastal areas of the lake

• To carry out artificial purification of water from blue-green algae.

It should be noted that as of August 26, the level of Lake Sevan is 1900.69 m, which is 3 cm higher than the level of the same day last year: 165.607 million cubic meters of water have flowed into the lake through Arpa-Sevan tunnel since the beginning of the year, whereas 131.445 million cubic meters of water has been released from the lake for irrigation.