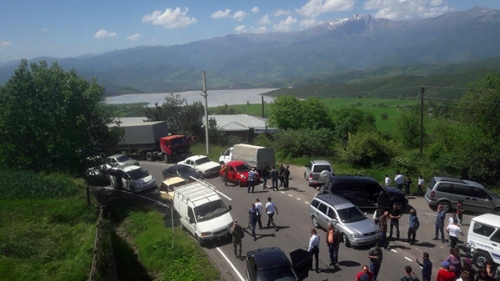 On 17 May the residents of Artsvanik, Chapni and Sevaqar Villages of Kapan Community in Syunik Region have blocked Goris-Kapan interstate highway.

The residents are demanding to stop the operation of Artsvanik tailing dump of Zangezour copper and molybdenum combine.

They are demanding to annul the governmental resolution 791-N “On Recognizing Eminent Domain in Some Areas within Administrative Areas of Artsvanik, Sevawar, Atchanan, Chapni and Syunik Rural Communities in Syunik Region in the Republic of Armenia” dated on 21 May 2015.

Reminder: with the resolution adopted this year eminent domain was recognized over 491.8093 ha of land areas in Artsvanik. Sevaqar, Achanan, Chapni and Syunik Communities or the expansion of the tailing dump owned by “Zangezour Copper and Molybdenum Combine” (ZCMC) CJSC. Largest land areas have been alienated from Artsvanik Village - 274.8378 ha for the benefit of a private company.

The residents are also demanding to introduce a new system for compensation of environmental damage and risk insurance in impacted communities.

At 15:00 the residents unblocked the road after Armenian PM Nikol Pashinyan’s call and the arrangement to have a meeting at the Armenian Government.