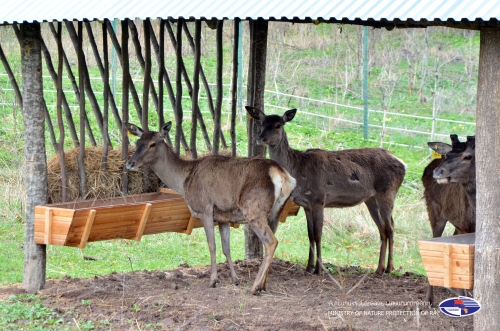 The Caucasian Red Deer, which has been missing for a long time from the Armenian Highlands, is back now. In the frames of the Caucasian Red Deer reintroduction project, 3 deers imported to Armenia from the Islamic Republic of Iran, has been transferred to Dilijan National Park. For around one month the animals have been in quarantine. Out of these imported animals two are female deers and one is male deer. The import of the second group is planned to implement at the second half of 2018.

“Due to the Armenian Government, WWF-Armenia, and CNF, we already have the first import of the deers and we plan to increase their numbers not only in the natural way – reproduction, but also through importing additional groups from Russia and Georgia. An agreement has also reached with “GagikTsarukyan” Foundation to launch a process of importing female European deers,” Acting Nature Protection Minister Artsvik Minasyan says on the official website of the ministry.

WWF Armenia Director Karen Manvelyan informed that the Breeding Centre for the Red Deer occupies an area of 1 ha in Dilijan National Park. It’s expected to have 9-10 baby deers each year at the center, which will be later transferred to an enclosure for the Red Deer with the area of 9 ha, where their contact with the humans will be excluded.