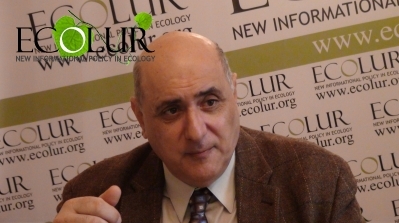 How is climate change affecting land degradation? What steps is Armenia taking to achieve neutral degradation? Ashot Vardevanyan, Head of Division of State Cadastres, Maintenance of Registers and Monitoring of RA Environment Ministry, spoke about this during the expert round table on "Food Security and Climate Change" held on April 13, 2021 at EcoLur Press Club. He noted that there is a direct "correlation" between the state of the lands and "climate change". "The accumulation of large reserves of organic carbon in the aboveground part of the soil, the increase in the amount of humus in the underground part of the soil lead to the reduction of greenhouse gases," Ashot Vardevanyan said.

According to him, currently 86% of the country's territory is degraded and 44% is desertified in Armenia. The protection of land resources is of great importance for Armenia in terms of food security. But for years, land has been neglected as a component of sustainable development. Only in 2015 that approach changed after the Sustainable Development Summit held that year.

Ashot Vardevanyan mentioned that in April 2019 the procedure of classification of the land area of ​​the Republic of Armenia was approved, its purpose is to carry out land monitoring to understand how to achieve neutral land degradation. "On December 10, 2020, resolution "On Classification of Land Area in ​​the Republic of Armenia" was approved, which is the first direct information," Ashot Vardevanyan said.

The speaker said that the draft resolution of the government on approving RA land degradation neutralization program has been submitted to RA Government for discussion, which defines the voluntary goals, planned measures, expected results of those measures, risks, program implementation measures, etc.

Ashot Vardevanyan also referred to the programs having been implemented and are being implemented in Armenia to achieve neutral land degradation. "In 2015, Armenia participated in "Achieving State of Neutral Land Degradation, Idea of ​​Making It Practically Applicable in Armenia" pilot project. As a result of the project, it became possible to assess the opportunities for achieving neutralization of RA land degradation. An opportunity was given to make relevant decisions.

In 2018, Environment Ministry developed "Implementation of Idea of ​​Neutral Degradation of Lands in Ararat Valley" pilot project. Narek community, Ararat Region, was selected for this program, then Vedi was added.

In 2021-2024, with the financial support of GEF, the Food and Agriculture Organization of the United Nations (FAO) will implement the project "Implementation of commitments and responsibilities within the framework of neutralizing land degradation in Armenia through sustainable management of degraded meadows."

"This program envisages the restoration not only of meadows, but also of arable lands. The program will be implemented in Lori, Syunik Regions, enlarged Tumanyan and Gorayk communities," Ashot Vardevanyan said. With the funding of the Green Climate Fund, in 2021-2029 "Forest Stability, Adaptation, Improvement, Mitigation of Rural Development" project will be implemented, and within its framework reforestation and afforestation will be carried out.

Climate Change and Threats Jeopardizing Agriculture Sector in Armenia
Bardukh Gabrielyan on Bioresources in Lake Sevan
Armenia INDC Approved: How Much Greenhouse Gas Emissions Will Armenia Reduce? How Much Forest Cover Will It Have in 2030?
Food Security System in Armenia and Run State Policy
World Celebrating Earth Day on April 22