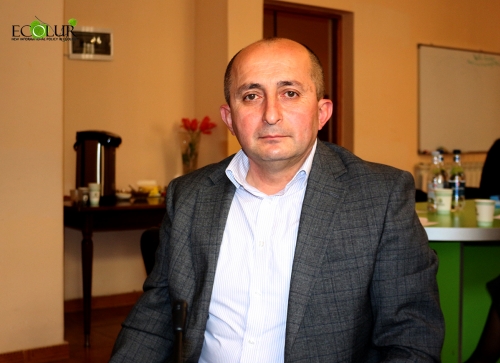 Never before in history have agri-food systems faced so many new, unprecedented disasters as in recent years. The whole food system is endangered. Disasters go beyond the economic sphere with devastating consequences for food security and nutrition, as Vahan Amirkhanyan, Food and Agriculture Organization (FAO) Team Lead/National Expert on Agriculture, said on April 13, 2021 at EcoLur Press Club on "Food Security - Climate Change" expert roundtable.

According to the speaker, Armenia is one of the extremely risky countries in terms of agriculture. Climate change in Armenia has led to biodiversity loss, ecosystem degradation and water scarcity. "Food security cannot be imagined without developed irrigated agriculture. We are already facing that problem in Armenia. Farmers note that in recent years the flow of water from springs and access to irrigation water has sharply decreased. The scarcity of water leads to a decrease in agricultural production, reduces the economic efficiency of farmers, which, in turn, creates a problem of food security," he said.

Compared to the 1960s, the frequency and intensity of hydrothermal hazards, such as droughts, hurricanes, hail and early spring frosts, have increased by about 20% in the context of climate change. "In some years, about 123,000 hectares of our cultivated lands have been damaged, which is about 30% of the entire territory of the republic," he said.

According to Vahan Amirkhanyan, it is predicted in Armenia until 2100 that the movement of agro-climatic zones will be 200-400 m, crop yields will decrease, soil degradation will increase and fertility will drop, whereas the negative impact of dangerous hydrothermal phenomena will increase.

"The frequency of recurrence of disasters worldwide more than tripled in 2010 compared to 1970 և 1980. It also has a negative impact on agriculture. Disaster economic losses averaged $ 170 billion a year in 2010. “Calculations show that about 25-26% of it goes to agriculture," the speaker said.

He noted that given the growth rate of the world's population, the population will reach 9.3 billion people by 2050, so there will be a question of feeding the population. "According to FAO, from this view point food production should be increased by about 60%. Otherwise, due to the frequency of disasters caused by climate change, the world may face serious problems," Vahan Amirkhanyan said.

He noted that the document proposed to implement a multidisciplinary system risk management approach for disaster risk forecasting, prevention, preparation, response. And in the sectoral documents it is necessary to include not only natural hazards, but also man-made and biological threats. As an example, Vahan Amirkhanyan mentioned that the COVID-19 epidemic has caused problems in food security, food sales and supply all over the world.

The document proposes to develop and adopt standard disaster risk reduction or mitigation management and coordination procedures that will also be applicable in the agricultural sector. "It is possible to develop and implement agricultural best practices in the field of climate change adaptation to reduce and mitigate disasters, including smart climate farming practices.

In recent years, the Armenian government has taken positive steps in this direction, in particular, with the introduction of hail protection nets, drip irrigation, intensive gardens and greenhouses. The insurance system is already being successfully introduced in Armenia. We propose to establish a repository of both local and international good experience models for disaster risk reduction and mitigation and climate change adaptation models. At the same time, we propose to introduce early warning systems for disaster risks, including biological disasters. There are currently no early warning systems in Armenia. It is time to use modern technologies, including satellite, so that hydrometeorological stations can warn farmers about the spread of diseases and pests. It is possible to introduce a system for assessing the damage caused by disasters in the agricultural sector. At the moment, our organization is developing software, through the system we will be able to accurately assess the damage and losses caused by disasters, and through the information already received, we will be able to develop the right policy," he said.

Nona Budoyan, Head of Climate Policy Department of Environment Ministry, asked how the calculation of the damage caused by the disasters will be carried out. In response, Vahan Amirkhanyan said, “FAO has developed a methodology approved by RA Agriculture Minister in 2015. Software is currently being developed, which is not just for Armenia. FAO is developing a methodology based on our experience in Armenia to calculate those damages and losses in all communities using the same methodology. It will be available to the relevant ministries and government. And based on that, it will be possible to develop a policy."

UNDP Climate Change Program Coordinator Diana Harutyunyan inquired about the timelines for the application of the Disaster Methodology. "I hope that in 3-4 months the software will be ready," Vahan Amirkhanyan responded.