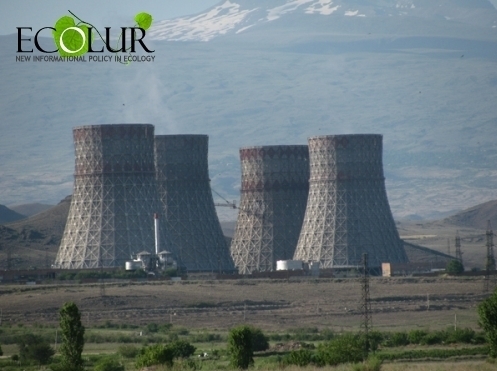 On January 30 at the meeting of RA NA Standing Committee on European Integration, NA deputies and representatives of the civil society discussed issues related to Armenia-EU relations. EcoLur raised the issue of developing a roadmap for the decommissioning of the Armenian Nuclear Power Plant.

The draft Strategic Plan for the Development of Energy Sector of the Republic of Armenia (up to 2040) considers the scenario of prolongation of ANPP activity till 2036. With the help of the Council of Europe, Armenia has developed a set of documents necessary for the closedown of the ANPP.

The parties undertook to ensure high levels of nuclear safety and nuclear security. In this respect, Article 42 of the CEPA states in particular:

“(g)   the civil nuclear sector, taking into account the specificities of the Republic of Armenia and focusing in particular on high levels of nuclear safety, on the basis of International Atomic Energy Agency (IAEA) standards and standards and practices of the European Union referred to hereinafter, and on high levels of nuclear security, on the basis of international guidance and practices. The cooperation in that area will include:

(i)   the exchange of technologies, best practices and training in the fields of safety, security and waste management in order to ensure the safe operation of nuclear power plants;

(ii)   the closure and safe decommissioning of Medzamor nuclear power plant and the early adoption of a road map or action plan to that effect, taking into consideration the need for its replacement with new capacity to ensure the energy security of the Republic of Armenia and conditions for sustainable development.”

At the meeting of e RA NA Standing Committee on European Integration, EcoLur expert Victoria Burnazyan referring to the provisions of Article 42 of CEPA, said: “Article 42 of the CEPA provides for the development of a road map for the closure of a nuclear power plant. Last year, the Government of Armenia adopted the CEPA Implementation Roadmap, and we did not find a single point in the energy block related to the nuclear power, nuclear waste. I wanted to know if it was planned to include the issue of nuclear power plant and waste in the development of the new roadmap.”

In response, Chair of NA Standing Committee on European Integration Arman Yeghoyan said: "There is no word about the closedown of the nuclear power plant and it very clearly says that the closedown of the nuclear power plant can only be feasible when the Republic of Armenia has adequate energy from its current nuclear source. This may also give rise to manipulation in the future. Armenia simply has no obligation to close the plant. It has no obligation but agreement to upgrade or replace it. When and by what means – it’s already another question."

For his part, MP Gayane Abrahamyan from NA "My Step" faction said: "It is precisely what our neighbors, both Azerbaijan and Turkey have said in this formulation, that CEPA demands closedown and that you should do it, and that becomes the main topic of discussion in almost all international and various European platforms: this was also discussed at the Baltic Assembly in Vilnius, and again, according to the CEPA's comments, it was answered, this was discussed and a recommendation was made in one of the Euronest resolutions in the Committee on Energy Security.

That is, this is the subject of the main manipulation that they are trying to use against us. In this case we have to be very clear and very careful in our comments. Certainly this is an environmental issue, and it certainly raises serious concerns. But we also need to consider what was said in the latest IAEA report that Armenia has significantly enhanced its security mechanisms and the Medzamor Nuclear Power Plant scores 3.8 out of 4 I am not mistaken.

That is, according to their observation, at least there is no problem there at all. Yes, the process of re-equipment must be carried out. But we should not at least say that CEPA is demanding that the plant be shut down. This is something that Azerbaijan keeps on saying. We should not at least speak with this vocabulary, we must be very careful because this gives rise to a great deal of speculation.”

RA Deputy Minister of Territorial Administration and Infrastructure Hakob Vardanyan in his letter HV/22.3/1757-2020 dated on 29.01.2020 answered EcoLur's questions regarding the safety of the nuclear power sector and the construction of a new nuclear power unit. In response to EcoLur’s question whether security risk assessment has been carried out in connection with the closedown of ANPP Unit 2 and what the results are, the ministry responses that in the process of risk assessment during decommissioning, the ANPP is guided by the requirements of the applicable legislation in force. According to RA Law "On Safe Use of Nuclear Energy for Peaceful Purposes" (adopted on February 1, 1999), the activities of objects having significance in terms of security are subject to licensing.

According to Decision No. 707 of the Government of the Republic of Armenia dated on June 14, 2005 "On Procedure for Licensing and Approval of License for Decommissioning of Nuclear Plant Operations", the list of the documents to be submitted to the Regulatory Authority for obtaining a license of decommissioning is approved, including the most significant and relevant documents - Decommissioning Project, Security Analysis Report, Environmental Impact Report, as well as Environmental Impact Assessment Report issued by competent public authorities.

The abovementioned documents have also been developed in conjunction with other documents related to the decommissioning with the support of the Council of Europe, taking into account that the operation date of the Nuclear Power Plant expired in September 2016. The form and content of these documents are in accordance with the requirements of the applicable legislation, and in their absence the IAEA requirements/recommendations have been taken into account.

The conducted research indicates that the current regulatory requirements for staff, population and the environment will not be exceeded during the ANPP decomissioning. It should also be noted that all documents related to the extension of the operation of the 2nd power unit for 10 years are subject to review/updating for submission to the regulatory authority within the timeframe provided by the legislation.