5.3 Million Euro for Management of Hazardous Wastes in Yerevan: Whether Capital To Get Rid of Obsolete Pesticides and DTT Burial Sites? 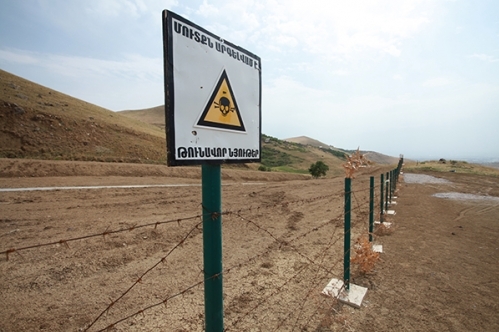 Yerevan Mayor and the Head of EU Delegation to Armenia, Ambassador Ms Andrea Wiktorin signed a Memorandum of Understanding on 21 January to install a new and effective system of hazardous waste management through systematic reforms in city administration.

According to the official website of the municipality, the total project budget is € 5,326,377
It should be noted that in the Erebuni administrative district of Yerevan, near the communities of Jrashen, Geghanist and Musavan there is a dump of hazardous waste pesticides. There are about 1050 tonnes of pesticide contamination, 4100 tonnes of second class and 8500 tonnes of third class pollution. It is located in an active landslide zone and poses a serious threat to the environment. The cemetery is adjacent to the Erebuni State Reserve, where species of wheat and other crop plants are preserved.

In 2018, a preliminary environmental impact assessment project was submitted for Nubarashen Obsolete Pesticide Waste Disposal, Safe Disposal, Territory Cleaning and Sustainability with 2 public hearing held. However, it is not clear with this plan where the obsolete pesticides should be temporarily stored for disposal in the country.

In addition to this cemetery, there is also aDTT cemetery in Erebuni district of Yerevan, the issue of which was voiced last year by Shant TV.

In his speech at the ceremony of signing the agreement Yerevan Mayor Hayk Marutyan stressed that Yerevan applied for the competition for participating in the program and won it which means that the current policy in hazardous waste management adopted by the RA capital city is in accordance with the EU principles.

“Yerevan has lots of omissions in hazardous waste management, actually the community has never paid serious attention to this problem. We have a lot to be done to solve the complex problems of this field,” Mayor Hayk Marutyan said.

The Mayor also noted that Yerevan had made all possible preparations taking into account the liabilities provided by hazardous waste management program which allows starting the implementation of the program from an effective beginning.

The N (NEAR-TS/2019/412-943) grant agreement “On Cooperation between Yerevan, Warsaw and Tirana on Common Challenges in Hazardous Waste Management” was signed between Yerevan Municipality and the European Union on December 17, 2019. The goal of the agreement is to install a new and effective system of hazardous waste management through systematic reforms in city administration. It will make it possible to strengthen the new and up-to-date institutional and professional capacities in hazardous waste management, the process of integrating thereof into respective structural areas, as well as the development of relevant procedures and integration into relevant city structures.