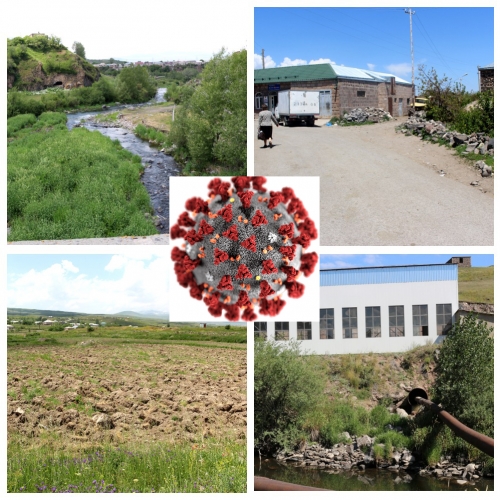 Under the conditions of COVID -19 epidemics, the concerns of Verin Getashen community, Gegharkunik Region, Armenia, have increased. In this community, where people have struggled for years to solve the problem of irrigation water, new challenges have arisen today: rising unemployment, declining incomes, additional costs for distance learning equipment, and medicines for treatment.

Verin Getashen has a problem with irrigation water: 350 hectares of agricultural land is waterless, which are not cultivated due to the lack of irrigation water. In this regard, Argitchi SHPP operated by Hydrocorporation CJSC has a significant impact on the community, where, in 9.5-kilometer-long area, the river has low water, transporting water to the station through its diversion pipeline. The community has been in conflict with "Hydrocorporation" CJSC for several years now due to the lack of irrigation water, non-paymnet of the damages caused to the agricultural land areas of the residents with the company's equipment.

“The SHPP administration has not fulfilled its obligations properly. There was an agreement, signed by the parties, that they were obliged to provide 300 l/s of gravity water at the beginning of the administrative area of ​​the community, where the SHPP pipeline passed, during the irrigation season. For about 150 hectares, water had to be supplied from the head section.

They did not fulfill the obligation: that pipeline was moved to another section for pumping stations. They lowered it down. We have established a pumping station, we are pumping up water, which is an additional expense for the population," Tigran Muradyan, Verin Getashen Community Head, said in his conversation with EcoLur.

Argitchi SHPP was put into operation in 2013. The water use permit was issued until 26-03-2017, which, according to Environment Ministry, has been extended. The company license expires on 20-11-2028. The annual water intake of Argitchi SHPP is 50.1 million/m3, the environmental flow is 1 m3/s. According to its water use permit, the SHPP should not operate in August. Meanwhile, in August 2020, EcoLur's camera recorded the fact that the SHPP was working in those days, which is a violation of the water use permit requirement. It should be noted that the SHPP also operated in August 2019, for which RA Nature Protection and Mining Inspection Body imposed an administrative fine on the company.

It should be noted that in 2020 the RA government declared a year of low water in Gegharkunik and Tavush Regions. In this regard, President of "Martuni Women's Community Council" NGO Anahit Gevorgyan said. "It is a very drought year. Our fields have been burnt down this year. People are worried that they do not have hays, they do not have pastures, and in case they do not have potatoes, it will be a tragedy for the villagers. Therefore, if there is an agreement that this year they should leave water for one SHPP turbine, that turbine should also stop,” Gevorgyan said.

"The problems continue to this day. We tried to discuss and solve the problems in different ways, but it didn't work. We have had a problem with compensation for 10 years. The company's pipeline runs through the land areas of several residents in the community. According to the preliminary agreement, compensation was to be paid by the company, but so far, there has been no compensation before going to court. This is the second year that three families have filed a lawsuit. The case is being investigated for compensation," Tigran Muradyan said.

Unemployment Rising Due to Restrictions on Working Abroad

As a result of restrictions on going to work abroad, the number of unemployed in Verin Getashen has increased. "Last year we had about 1200 residents who went abroad for work. This year only around 100-120 people left, whereas about 1,050 people remained in the village.

In their conversation with EcoLur, the residents mentioned that the difficulties of the socio-economic life of the community are conditioned with the lack of jobs, inadequate, low wages for the work done, and the difficulties in selling the harvested agricultural products.

According to Verin Getashen Community head, about 100 families in the community have benefited from the social coronavirus neutralization programs.

In terms of the distance learning introduced under the conditions of COVID-19, community residents have faced a number of difficulties due to lack of adequate equipment, internet outages, lack of additional internet funding, and overcoming the barrier of direct student-teacher communication, as well as the unsatisfactory quality of education.

Due to COVID-19, a new outbreak of environmental pollution has occurred, in particular, the community area and the coastal areas of Lake Sevan are polluted with used masks and gloves.

The residents of Verin Getashen address the following suggestions to the Government of the Republic of Armenia to overcome and mitigate the challenges caused by COVID-19:

· Provide state support to industries that provide sufficient jobs in the community, with the precondition of involving returned migrant workers in those jobs;

· Use the strengths of the Martuni region, in particular to develop tourism;

· Given the strategic importance of Lake Sevan for the country, find sources of funding for sewerage of coastal settlements, providing them with biological mini-treatment plants;

· As the fish from Lake Sevan rise to the upper reaches of the Argitchi River for spawning purposes, strengthen state control over the activities of Hydrocorporation CJSC in order to comply with all its restrictions on the use of environmental and natural resources, otherwise to eliminate the recorded violations, terminate its activity in the manner prescribed by law, up to deprivation of the activity license;

· Continue to provide information on the epidemic, highlight the need for a campaign to raise social self-awareness among the population, and build a subculture of social responsibility;

· Strengthen control over those infected with COVID-19 in isolation.