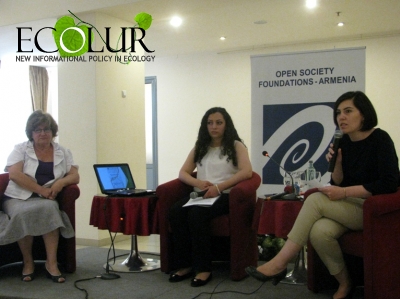 Victoria Burnazyan presented the findings of the research:

Inga Zarafyan mentioned that the problem of SHPPs is the problem of the system. “The governmental bodies don’t demand to comply with our legislation, not to mention the European standards. The legislative requirements are not complied with from projecting stage, there are n certain requirement, while the data are old – starting from the Red Book, which has legal force. The National Assembly is discussing a bill for two years, which says that SHPPs can’t be constructed in Sevan basin. For example, our endemic fish species get extinct because of the SHPP constructed on the Argitchi River. The residents can see how the fish spill out of the pipes during breakdowns and get spread in their fields. The State Environmental Inspection hasn’t arrived even once to draw up an act. But our endemic fish species get extinct. What about the communities, they don’t get any benefit from the SHPPs,” Inga Zarafyan said.

“In my opinion, the situation should be stopped in Armenia, another monitoring in needed to be carried out in Armenia together with Inga Zarafyan and the Pan-Armenian Environmental Front to understand what is eventually happening and how to stop this process and punish the people, who operate the SHPPs, those ministries and governmental bodies who issue the right to operate SHPPs. We don’t need SHPPs any more. What do we want? To finally refuse from Armenia as our motherland?” said Silva Adamyan, Coordinator of Public Environmental Alliance.

“We should realize that one of the main reasons for the intense development of SHPPs is tariff policy. This policy should be immediately reviewed,” said Pan-Armenian Environmental Front Member Levon Galstyan and mentioned that our officials have one SHPP constructed for their offspring.

“SHPP produce clean energy, but in Armenia it’s implemented in a way, which it turns into a service of business interests,’ Arthur Grigoryan said, a member of Teghout Support civic initiative. He also said that 40% of SHPP projects in Norway is rejected, while in Armenia he doesn’t know any case of SHPP project rejection.

One of the participants raised a question whether there are tools which competent bodies can use to implement the proposals included in the report. Inga Zarafyan mentioned that SHPP constructers should first of all be deprived of funding sources.

A question was raised connected with German KfW Development Bank, which sounds as follows: how it happened that the Bank is creating “Arpi Litch” National Park, on one side, and funds the construction of SHPPs in the same territory, on the other side. The reply was as follows: “We tried to find out from KfW how they assess the SHPP projects they fund, which contradict to our laws. We are not satisfied with their replies. They have certain requirements of funding - 100% repayment etc, environmental requirements are missing and we want KfW’s attention to environmental risks,” Inga Zarafyan said.

“We had a correspondence with KfW Bank presenting them the case with “Argitchi” SHPP outlining that the SHPP is constructed with expired documents.”

“Arevik” SHPP Make Tashtoun River Get in Disastrous Condition
“Learn about Methodology for Detecting Zones of Environmental Emergency Situations and Environmental Disasters
Photo Report to SHPP Discussions
New Data on SHPPs: Presentation and Discussion
Chqnagh River Will Be in Critical Condition Because of SHPPs