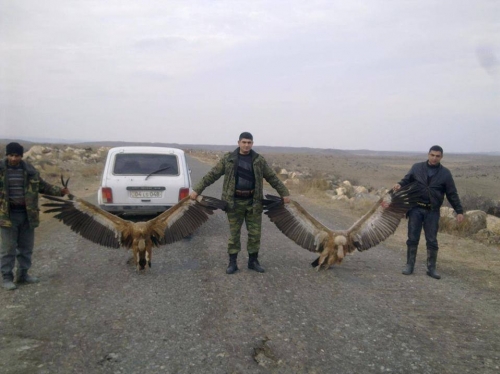 The Armenian Police have detected the hunter of the vultures.Their press release says, 'Due to the measures taken by Armavir Division of Police, it was found out that illegal hunting was carrried out in Armavir Region in 2007 by Y. Poghosyan born in 1972. The investigation is in progress.' Hunting vultures is forbidden in Armenia. In case of the vulture, the damage caused to nature is assessed in the amount of 250,000 AMD.

Botanical Garden Reviving
Vahe Jilavyan: We Have Sufficient Whitefish Reserves in Lake Sevan
Over 300,000 Trout Young Fish Let Out Into Kartchaghbyur and Masrik Rivers
Alarm Signal: Storks with Polluted Feathers, Deprived of Any Opportunity to Fly Targeted by Dogs in Hovtashen
Inspection In Utilities Companies By Traces of Contaminated Storks