UN Special Rapporteur: Evidence of Cause-and-effect Link of Environmental Pollution Must Be Provided By Those Polluting Environment 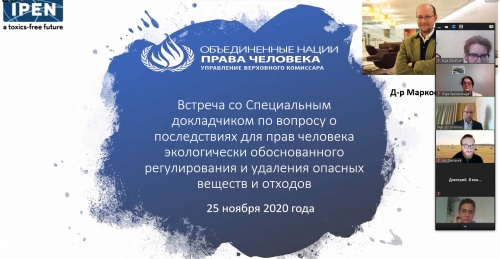 On November 25, the consultation of the UN Special Rapporteur on Human Rights, Chemicals and Waste, Marcos Orellana, was held with representatives of the International Pollutant Elimination Network (IPEN) in the region of Central and Eastern Europe, the Caucasus and Central Asia. As the IPEN representative Olga Speranskaya mentioned, the UN Human Rights Council has extended the mandate of the UN Special Rapporteur on toxic substances and waste.

The meeting was also attended by members of IPEN from Armenia - “Armenian Women for Health and Healthy Environment” NGO, “Center for Community Mobilization and Support” NGO (CCMS) and “EcoLur” Informational NGO.

EcoLur and CCMS had a presentation on the following topic: “Chemical pollution with heavy metals destroying the environment and health: an alarm signal from Akhtala, a mining community in Armenia”. The presentation was drafted with the support of Czech “ARNIKA” NGO. In particular, the presentation said:
“0.33% of the territory in Armenia is violated due to mining activities. At the same time, 1,500 hectares of land are under tailing dumps, where over 1 billion tons of waste from mining companies have been accumulated.

Due to the legislation imposed by the lobbyists, the polluter-pays principle does not work in Armenia.

The government approves programs on the development of even unprofitable mines, where 1 ton of ore contains less than 1 gram of gold (for example, Amulsar mine), which would have been impossible in case of restrictive measures for chemical pollution.

Like other areas under mining, Tumanyan area in Lori Region, Armenia, is polluted with heavy metals and toxic elements. The proven impact of chemical pollution on children is of particular concern.

The scientific research conducted by ARNIKA has shown that one of the most toxic elements, arsenic, is present in 94% of biomaterial samples taken from children living near the tailing dump in Akhtala. A high concentration of not only arsenic has been detected in the environment - water, soil, bottom sediments, agricultural products, but also that of other elements hazardous to health - cadmium, zinc, lead. The locals claim they suffer from headaches and frequent cancer cases.

We raise the issue of protecting the rights of the local population from the impact of mining companies, increasing information about pollution, the possibility of compensation for damage to health and farms, involving government agencies and mining companies in eliminating pollution. In his closing remarks, Dr Marcos Orellana specifically said:

“Now more and more land is viewed as a depository for any kind of mining that needs to be fully developed irregardless of the piled up environmental problems. This is precisely the kind of question that raises extraterritorial obligations on human rights.
We need to show all communities a fair transition to a clean environment. And this must be done by manufacturers. Evidence of a cause-and-effect link between pollution must be provided not by communities trying to save their lives, but by those who are poisoning the environment. And this is the basis for access to justice,” Marcos Orellana concluded.

Coronavirus Escalated Social Problems in Shnogh and Teghout
In 2021 Inspection Body To Conduct Inspection in Five Non-Operating Mining Companies
Azerbaijani Servicemen in Sotq gold mine? Defense Ministry Denying It
Qaraberd Municipality, Owning Gold, Located in Caravan
What Is Expected to Sotq Mine: One Part of Mine is Located in Qarvatchar: MP