Meghradzor Resort Zone and Marmarik River Under Pressure of Mining 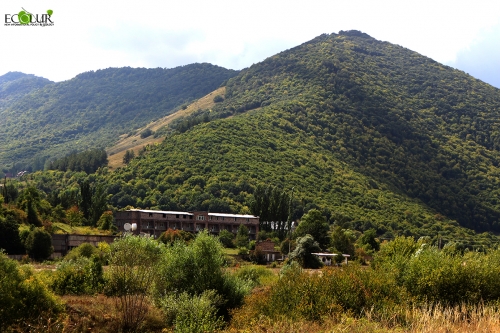 The population of Meghradzor resort area and the resort business in Kotayk Region is concerned about the impact of the mining industry.

They expressed their views during the meeting with the EcoLur team.

Movses Manukyan, a member of “Healthy Hrazdan” initiative, called the mines in the Marmarik Gorge a "bomb." "If anyone starts developing there, the damage will not only be to the general ecosystem of the gorge. The Marmarik River flows there, the waters of the river are collected and directed to the irrigation of the Ararat valley. If we pollute those waters, we immediately pollute the irrigation system of the Ararat Valley," he said.

Meghradzor Gold mine is developed by "Meghradzor Gold" LLC in the territory of Meghradzor Community. “Paramount Gold Mining” CJSC had the right to soil management for Lusajur site of the same mine.

The Marmarik River, which flows through the area, has the highest pollution, class 5, for the manganese. According to the end-of-year data of 2020 by "Hydrometereological Monitoring Center" SNCO of RA Environment Ministry Armenia, the river in the Marmarik estuary was polluted with vanadium, iron, barium, and potassium.

According to Movses Manukyan, the Marmarik gorge mines were examined during the Soviet Union, but they preferred not to develop them. "They did not develop it, considering that Marmarik gorge is more preferable for organizing recreation and tourism, as there were dozens of camps and sanatoriums there," he said.

Meghradzor community has a great potential for tourism development. The area is attractive with its rich nature, forests and waterfalls. There are ancient monasteries here. They have a woodworking museum. However, according to the locals, poor roads and poor drinking water quality do not contribute to the development of tourism.

The residents said that it would be possible to repair the roads with the financial support of mining companies. "If the roads were asphalted, more tourists would come. Meghradzor would become a center of tourism," they said.

The community is also unable to develop agriculture due to the problem of irrigation water, high seed prices and small plots of land. Along with the lack of irrigation water, the villagers mentioned the problem of the quantity and quality of drinking water. "Drinking water comes from forests and mountains. There is one basin, water is collected from the mountains, from all places, from where the water flows to the village, getting polluted on its way. A new, bigger pool is needed and it should have filters," the residents said.

In their conversation with EcoLur, the villagers mentioned that all the above-mentioned issues could have been solved if “Meghradzor Gold” LLC, which works in the community, had immediately allocated to the community the environmental fees paid to the state. In his turn, Community Head Narek Harutyunyan attached much importance to submitting relevant reports to the community by the mining companies.

“If any mining company operates in the area, there must be some commitment to that community. The area of ​​the settlement is used, there will be pollution in the settlement, there is nothing in the monetary form. For the use of the subsoil money is paid to the state, whereas the community receives only land rent, or property tax, or land tax. If you count that, it's too little. At least the community should have a share of the income tax. The community would manage that amount, invest it on asphalting or drinking water or implementing subsidy programs,” he said.

"Meghradzor Gold" LLC has no obligations to Meghradzor community under the soil management contract. According to Meghradzor Community Head, the community kindergarten works on a free-of-charge basis thanks to the support of the company.

Member of "Healthy Hrazdan" initiative Movses Manukyan mentioned. "During the Soviet years, the Meghradzor gold mine was operated in a closed way. The ore was transported to Ararat ore dressing plant. And now it is openly developed there, the negative impact is growing.

“Paramount Gold Mining” CJSC had the right to soil management for the development of Lusajur site of Meghradzor gold mine in the territory of Meghradzor.

In 2020, by the decree of RA Minister of Territorial Administration (TAI), the soil management right and the mountain allocation act issued to “Paramount Gold Mining” CJSC to Lusajur site of Meghradzor gold mine were terminated. The soil management agreement signed with the company was terminated.

It should be noted that according to the website of the Judicial Information System, the lawsuit by "Paramount Gold Mining" CJSC against RA TAI was accepted in RA Administrative Court. The court hearing will take place on May 10, 2021. The company did not include specific social obligations for the affected community in the company's soil management contract, but Meghradzor residents' suggestions on community development were noted:

·        Development of tourism and agriculture

·        Organization of qualification and training courses for medical staff

·        Mining companies report regularly to the community on their activities

·        Allocate a share of the income tax of mining companies for the implementation of socio-economic programs of the affected community.

This material has been prepared within “Liability of Non-operating Mining Companies in EITI Process” project impletmened by EcoLur with the USAID support within the frames of “Engaged Citizenry for Responsible Governance” project implemented by Transparency International Anticorruption Center.

This article is made possible by the generous support of the American People through the United States Agency for International Development (USAID). The contents of this article are the sole responsibility of the authors and do not necessarily reflect the views of USAID or the United States Government.