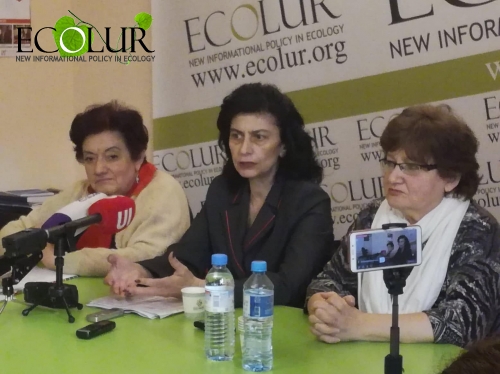 This year was very important for us because we realized that the local population started to defend their rights without any intervention, as President of EcoLur Information NGO Inga Zarafyan said at a press conference on December 20 at EcoLur Press Club.

Referring to Amulsar Gold-bearing Quartzite Mining Project, Zarafyan noted that the local population has been struggling together with environmentalists and civil society representatives for over 1.5 years. Continuing the topic of Amulsar, Director of Forests of Armenia NGO, lawyer Nazeli Vardanyan, presenting the chronology of Amulsar struggle and related litigation, noted that it has been the most active fight in the last few years.

Referring to the possibility of litigation by Lydian Armenia CJSC, which wishes to exploit Amulsar mine, Nazeli Vardanyan noted: "In August last year, Lydian International established two new organizations. These two organizations have applied to the Republic of Armenia, and the deadlines for their peaceful settlement have long expired. Six months have passed since the agreement with the UK, and 3 months with the agreement with Canada, and there is no process. They are well aware that if they apply now, they will only spend money and will not succeed,” she said.

Karine Danielyan, Chair of the Public Council's Environmental Affairs Committee, Chair of the Association for Sustainable Human Development NGO presented the main outcomes of Committee discussions for 2019. These include the issues of Lake Sevan, the impact of metal mining on the environment and health, the seizure of Yerevan green zones, in particular, the problem of Dalma Gardens and the construction of Shnogh HPP.

Danielyan positively assessed the cooperation of the Public Council with the public sector. "We have received the answers to our letters, there has been a response. The representatives of the ministries attended the sessions. In 2019 we had 15 discussions,” she said.

According to Karine Danielyan, the most risky zones in Armenia are Lori and Syunik Regions due to the metallic mining industry in Armenia. “Health and environmental indicators are quite low there. We had a disagreement with the Ministry of Health, which in the past thought that such a problem could not be confirmed because of insufficient toolkit.

But now the situation has changed slightly. At the invitation of the Ministry, the representatives of World Health Organization visited us and they are developing a common methodology on how to assess the impact of the environment on health,” she said.
Check out the details in the video.