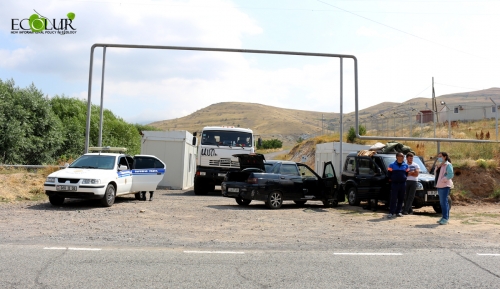 On August 20, when most of Jermuk residents left for Yerevan by car to take part in the protest demonstration dedicated to the preservation of Amulsar, the employees of the security company hired by "Lydian Armenia" CJSC resorted to provocations. They hit some Jermuk residents, moved the cars parked near the guard point leading to Amulsar, and stopped their trucks on the spot. Residents demanded that the cars be removed, but the trucks were not removed.

RA Police representatives informed the residents that the Company had rented the roadside section. The question arises as which body the roadside section has been leased to. It should be noted that according to Article 13 of RA Law on Car Roads, the size of the protection zones of RA general-purpose roads, including the axis of the road, is set from 30 to 70 meters for 1st to 4th category roads. The lands of the alienation layers of general-purpose public roads are under the management of the state road body and, in fact, this body can make a decision for those sections rather than the local self-government body.