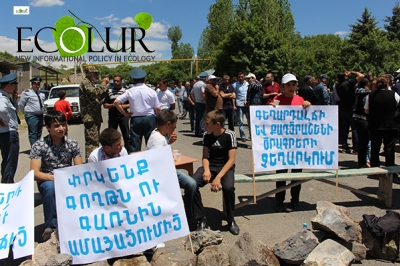 Goghti residents are claiming that the irrigation system is being implemented to serve the interests of certain people and to irrigate their land areas, which are located in the area adjacent to Lanjazat Village. The residents claim that Goght Village has 730 ha of irrigable area, out of which 550 ha is irrigated.

Goght residents also said there were no public hearings held with the resident and all the matters were solved behind the closed doors of the village municipality.

Goght Village Head Artavazd Hakovyan was also on the spot of protest demonstration: he supports the project and arrived there to persuade the residents to open the road. All the attempts were over with quarrels.

“At the same moment Regional Head Karapet Guloyan said that the construction works will be stopped and the discussions will be launched on Monday. Nevertheless, the construction works were launched twice and so far nobody discussed the problems raised by Goght residents,” said Goght Villager Vahram Sedrakyan and outlined, “We are demanding to take out all kinds of construction machinery, and if there any projects, let them organize discussions with Goght residents. If not, we are going to demand to cancel this project.”