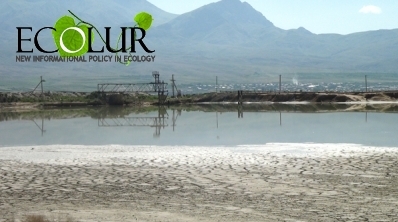 The residents of Ararat Region are concerned that the area of the cyanide tailing dump located in Ararat Village will be expanded in case of increasing the productivity of Ararat Gold Extraction Plant. On 23 July, “GeoProMining Gold” LLC, which is developing Sotq gold mine and Ararat Gold Extraction Plant, held a public discussion in Ararat Town announcing about its intention to increase the plant productivity by 75%.

“If the productivity is increased, how it will be proved that the area of the tailing dump shouldn’t be expanded and involve new areas?” ““Armash” Rural Community Support and Development Center” NGO Chair Tigran Matevosyan said in his interview with EcoLur.

It should be mentioned that according to the book entitled “Priority Issues Connected with Tailing Dumps in Republic of Armenia”, the most hazardous tails are owned by Ararat gold recovery plant. Under the authors, they are classified as highly hazardous, as they are used in the heap leaching process.

“The dust of the tailing dump poses a danger for the environment, as it gets spread through winds and can reach the adjacent villages, Kakhanov canal, which provides irrigation water to the land areas in Surenavan, Armash, Yeraskhavan, Paruyr Sevan communities,” Tigran Matevosyan said.

The residents of Ararat Region don’t have any official information about the pollution of atmospheric air in their residential areas. It hasn’t been assessed, which communities, besides Ararat town and Ararat village, are exposed to the impact of the tailing dump. According to the EITI first national report, the impacted communities with the operations of “GeoProMining Gold” LLC were considered to be Sotq village located in Gegharkounik Region by 85% and Ararat town by 15%, where Ararat Gold Extraction Plant is located.

Under the report, the impact of water is born by Sotq Village by 100%. In 2016, due to the environmental fees paid “GeoProMining Gold” LLC, Ararat town implemented subvention programs in the amount of 4,042,000 AMD, out of which 3,692,000 AMD had been provided for the repair and operation of an artesian deep well or the operation of a conserved well and 350,000 AMD for the development of project documentation.

This article is made possible by the generous support of the American People through the United States Agency for International Development (USAID). The contents of this article are the sole responsibility of the authors and do not necessarily reflect the views of USAID or the United States Government.