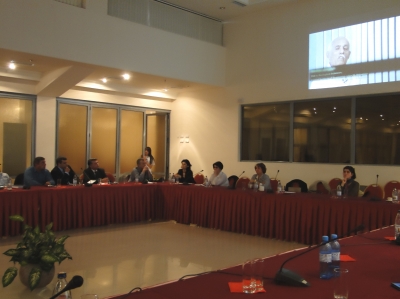 “Geoteam Company” representatives say that the only thing they wand from Amoulsar is gold, while environmentalists keep on insisting after 70 tons of uranium from the same mine will expose the whole region to radiation, their needs, gold or something else, won’t be taken into consideration.

“Amoular – Gold Rush” film was presented in the frames of “Arevordi” environmental festival and the environmentalists expressed their concerns, but “Geoteam” Company representative didn’t agree to them.

“Mine development will result in generating lead, which affects on nervous and blood systems and we will have high morbidity rate in the territory, which can bring to developmental delays. Besides, cyanides generated from gold mining can cause respiratory problems: this tiny dust spreads up to 30 km, it is accumulated in plants, passes to human chain and then gets to us,” “Armenian Women For Health and Healthy Environment” Environmental Health department employee is beating an alarm.

“Even in case of opencast mining you haven’t assessed obvious risks. You haven’t worked out any definite measures in regard with toxic substances left out as a result of mine development in your primary programs and didn’t take into consideration that Jermuk is a combination of very fine 6-7 mines, which can change their way from a slight shake,”   Yadoyan expressed his concern to Armen Stepanyan, Social Manager at the company planning to develop the mine.

Armen Stepanyan noted that they don’t see any hazard and their prospecting works are still in progress. He didn’t detail what they are going to do with the wastes generated from mine development or in case of health problems of the locals.

What about uranium presence Stepanyan said they detected only an insignificant amount of uranium and was sincerely surprised, “Aren’t you tired of speaking about uranium. We have sent the soil samples to the Czech Republic, radiation has been measures and it meets to the strictest requirements. Two weeks ago governmental representatives and representatives from State Committee for Nuclear Safety visited and took samples, measured radiation: we are currently waiting for the result.”

Stepanyan refused to answer the question by www.hra.am whether they exclude the possibility that there is any uranium in the mine and it can have its impact on the people’s lives.