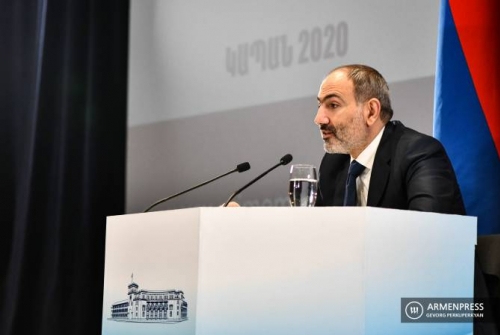 Armenian Prime Minister Nikol Pashinyan again called on Amulsar's protectors to clear roads to the gold mine. Prime Minister voiced his call on January 25, during the press conference in Kapan.

"There can be legal problems because I suppose Lydian will apply for arbitration, and I still call today to clear the road, and I think the actions of our beloved compatriots are illogical because it is because of them that the issue has reached a dead end and there is no way out,” Nikol Pashinyan said.

"If Amulsar were developed, this year we would have had 7.5% economic growth, but much higher economic growth, jobs. But on the other hand, the Amulsar Mine should not be developed at the expense of Jermuk, the health of the neighboring villages, and the irreparable damage to Armenia's environment. Previously there were doubts, and now there are doubts that some circles are interested in this situation, which are doing everything to make things happen on the stock exchange so that they can get their existing shares, but they will lose their dreams because we will not allow to have such developments and minor processes,"the Prime Minister said.

It should be reminded that the citizens who have been fighting against Amulsar Gold Mine Development Project for about 1.5 years have kept the roads leading to the mine blocked. They demand that the government refuse to implement Amulsar project.

During that time, the Armenian government ordered an international expertise of Amulsar project, for which the Lebanese company Earth Link & Advanced Resources Development (ELARD) was paid about $ 450,000. ELARD identified a number of gaps and issues in Amulsar Project Environmental Impact Assessment (EIA) report.