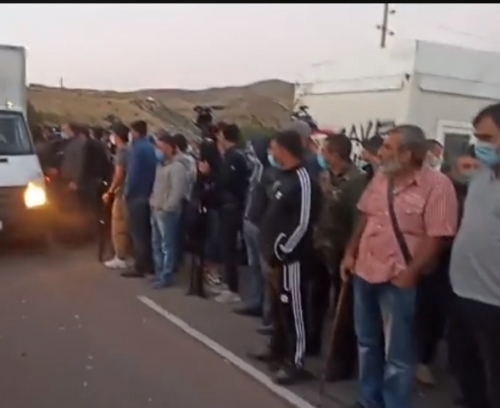 The situation in Vayots Dzor Region remains tense due to the developments around the Amulsar project. Locals blocked the road leading to Jermuk resort town because their demands were not met, as the member of the Armenian Environmental Front Leon Galstyan recently said in his Facebook live. Residents are demanding:

• The Government of the Republic of Armenia should annul the environmental impact assessment opinion issued to Amulsar gold-bearing quartzite mine development project;

• The security company, which is called to protect the property of "Lydian Armenia" CJSC, must leave the area, as the guards are armed with metal items and chains;

• Lydian Armenia caravans should be moved 30 meters back to Amulsar project site, clearing the roadside.

The situation escalated sharply after the night of August 4, when the caravans of the second guard post of Amulsar defenders were moved to the opposite side of the road on the instructions of "Lydian Armenia" CJSC, and the company's caravans were set up. Clashes took place during the day. There are detainees from both the guards and Amulsar defenders. On the instructions of the Human Rights Defender Arman Tatoyan, a rapid response group set off to Jermuk.

The residents recently opened the road leading to Jermuk. They will continue their fight tomorrow.