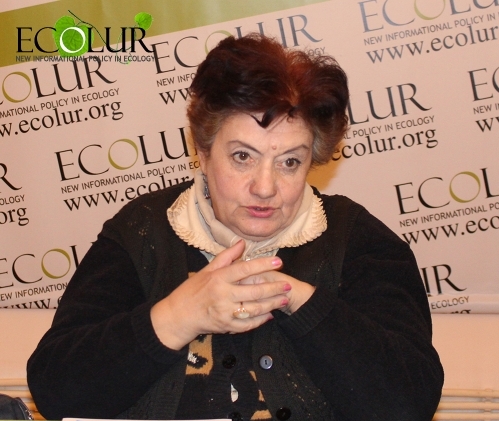 On June 11, the Armenian government decided to provide a budget loan of 63 billion 200 million AMD from RA state budget to the Armenian Nuclear Power Plant CJSC to finance the lifetime extension of the second power unit of the ANPP, renouncing the remaining $ 70 million of the Russian loan. Reminder: in 2015 Russia has signed a $ 270 million loan agreement with Armenia to provide a $ 30 million grant to extend the lifetime of the ANPP's second power unit.

EcoLur talked about this topic with Karine Danielyan, President of "Association For Sustainable Human Development" NGO.

- The Armenian government refused from the Russian loan for the ANPP modernization and decided to allocate funds from the state budget for that purpose. How realistic is the government's substantiation for giving up the Russian loan? Is it the best solution in terms of cost savings?

- The bigger component here is the  political one. The orientation of these authorities is more to the west than east to Russia. There is a desire to reduce ties from and dependence on Russia. I can see great dangers here. The nuclear power plant is the result of the work of Russian specialists, of course, together with our specialists. But there has always been a support component from the Russian companies.

The government presented the list of works carried out at the ANPP, in particular, the replacement and updating of the main systems. $ 200 million was spent for this purpose. $ 70 million has not been spent, which should be allocated from the state budget. How realistic is the allocation of that amount from the state budget under the conditions of COVID-19?

- If it is possible to borrow extra money from the West or other banks, this decision can be explained somehow. The progress will show. I think the government is hoping to bring in money from the west, as it is obvious that it is not possible to do it with internal resources, it has just not been announced yet.

In case of new loaning conditions, is it possible that the term of ANPP operation will be extended after 2026? Given the possible limitation of financial resources for modernization, what conditions are needed to ensure the safety of the ANPP?

- We need to handle such issues more seriously. One of the most serious security issues today is nuclear security. It is obvious that activities should be developed at a much more serious level. The nuclear power plant must have a strategic plan, including short-term and long-term operational plans. In this regard, the public should be aware of this. Maybe they have, they do not announce, but that is wrong.

On the one hand, it gives me some hopes that the IAEA thoroughly inspected the plant last year, and that the outcome was positive. There seemed to be hope it could be extended.  Environmentalists are fundamentally opposed to nuclear power plants and nuclear energy. Armenia simply has no other choice. I would very much like more attention to be paid to alternative energy in Armenia, especially to the works left by Paris Heruni. The solar energy that we can use cumulatively is, as I think, our future. Scientific work is carried out, but it must be supported.

The main expenses to ensure the security of the residents of the communities in the area of ​​the ANPP impact are vested on those communities. Is it possible to direct a part of the state loan to the construction of shelters and the purchase of necessary items - iodine preparations, gas masks?

- These communities should be recognized as affected, which may be hindered by the fact that we will have to accept the risk of the nuclear power plant in that case. But I completely agree that the social problems of those communities should be mitigated. How? Time will tell. Maybe we should raise this issue more actively. We are ready to join.