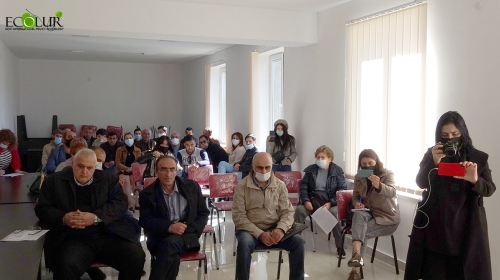 On November 8, public hearings will be held on the project of construction of "Loriberd" SHPP in the village of Kurtan, Gyulagarak enlarged community, Lori Region. The hearings were initiated by "Lorva Amrots" LLC. This is the second hearing. The first took place on October 21 in Lori Berd Community.

According to the presented data, the capacity of the HPP will be 26.7 MW, 110 million kWh of electricity will be produced annually. This is the second HPP after "Dzorahek" HPP, the capacity of which exceeds the 10 MW threshold for SHPPs.

By the decision of RA Government N 1300-A dated on September 8, 2011, the upper limit of the capacity of SHPPs was increased up to 30 MW instead of the previous 10 MW. This decision applied to only one HPP, Dzorahek HPP, built on the Dzoraget River in Lori Region, which has an installed capacity of 26 MW. Receiving the status of a SHPP, Dzorahek HPP started to use the tariff privileges established for SHPPs. The tariff for electricity delivered from the hydropower plant became 25,401 AMD/kWh, including value added tax, instead of 3.42 AMD/ kWh in 2010.

On the maximum capacity of 30 MW for SHPPs

Still in May, 2021, the Ministry circulated on the joint website for publishing draft legal acts the draft resolution of RA Government "On Making Amendments to Resolution N 1300-A of the Government of the Republic of Armenia dated on September 8, 2011". This draft law proposes to reduce the installed capacity threshold of small hydropower plants from 30 MW to 10 MW. The ground of this draft law was one of the proposals of the expert group aimed at the reforms in the field of small hydropower plants  within the frameworks of UNDP/GEF-funded "Support to SHPP-relating reforms through the dialogue of public and RA Nature Protection Ministry for Sustainable Use of River Ecosystems” and "Supporting new reforms in SHPP sector through CSO-government dialogue" projects implemented in 2014-2018.

Corruption risks were also pointed out in connection with the above-mentioned decision of the Government.

To date, however, the draft decision on lowering the threshold of the installed capacity has not been adopted.

What damage will be done to the environment?

In case of construction of SHPP, it is possible to cut down trees for laying pipes. The representative of "Gidepinvest" LLC Armen Grigoryan said about the tree felling. "That calculation has not been made yet. In the end, we will coordinate these areas with the forestry and the community.”

The representatives of the company, which intends to operate in the energy sector, promised to implement social programs and investments during the meeting with the community residents. The locals, however, demanded that these promises be legally substantiated, in addition to verbal promises.

According to Samvel Hunanyan, Head of "EnergoHekShin" and "Lorva Amrots" LLC, they plan to sign a memorandum with the community heads. However, the participants of the public hearing noted that the memorandum is not a legal act, it has no legal force.

The representative of "Ecogroup" company participating in the public hearing Taron Navasardyan noted that they plan to include a social action plan in the EIA project.

1. On 8 April 2021, the Armenian Government adopted resolution 488-N "On defining the list of rivers prohibited for the construction of small hydroelectric power plants conditioned with being spawning sites for red-listed or endemic fish species or overloaded with derivation pipelines by 40% and over”. One of 25 rivers listed in this resolution is the Dzoraget River, tributary to the Debed.

2. A certain section of “Lori Berd-1” SHPP pipeline will pass near the natural monument called "Getnandzav" cave tunnel, which is located 40-50 m from the left bank of the Dzoraget River at an altitude of 35-40 m. According to Article 30.1 of RA Water Code, applications for water use permits for newly constructed small hydropower plants are rejected if the construction of small hydropower plants is envisaged on rivers within a radius of 150 meters of natural monuments."