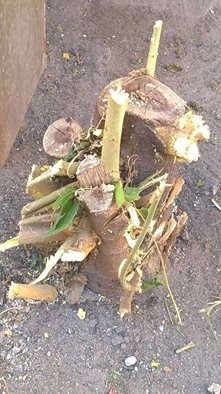 In February 2016 EcoLur received an alarm signal from a Yerevan resident, that a morus tree had been cut down in their yard located on Mashtots Avenue. According to the resident, the tree was felled down by 'Zigzag' employees, then they wanted to plant a new tree, but found no proper place. After being felled down the morus tree didn't die, 'The tree started growing very quickly again. Several ago we again detected there was no tree... This time the vandals were the condominium workers explaining it with the smallness of the tree... Probably they don't know that trees are small and then only grow,' the resident told EcoLur.