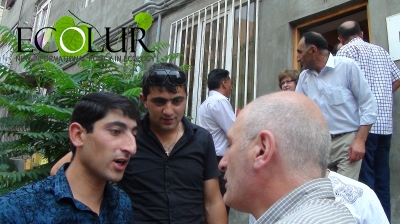 “210 Gndevaz villagers lodged a complaint to International Finance Corporation, IFC, a group of World Bank, and the complaints was admitted for investigation, as it has been substantiated,” Tehmine Yenoqyan said, ““Geoteam” workers from Saravan, Gorayk and Gndevaz occupied the whole hall from the very morning, so no room was left for Gndevaz villagers. Gndevaz villagers boycotted the hearings and left the hall….An opinion was voiced that the signatures under the complaint were faked, but I said whoever has any doubts can call upon to court…Several villagers told me they were being threatened, that the National Security Service would deal with them for their signatures. Nevertheless, after the hearings the number of the people opposing to the project increased, as people understand what kind of risks Amulsar project poses for Gndevaz. People outline that the animals already don’t eat the grass growing next to Amulsar. People don’t but apricots, as a heap leach plant is planned to be constructed nearby, so no clean ecology…An alternative minutes is being drawn up in Gndevaz right now. The community has different positions. I must do a very important remark. Now we have such a situation, when four communities may have conflicts with each other, even it may turn into clashes. While the government says it’s none of my business. As a result, the government takes its share, the company solves its affairs with the government due to its funds, while four communities remain, which have serious clash of interests.”

Levon Galstyan outlined the reasons, why Amulsar mine can’t be developed. “Amulsar mine wouldn’t be developed in any normal country, as it would be economically unprofitable, as there are wastes of heap leach facility, which are hazardous wastes of the first category. In Armenia these wastes are not levies taxes on, as there are not considered as wastes, but an anthropogenic mine, i.e. the company won’t pay any money for these wastes, and only this fact is sufficient for the mine to be developed here.”

Secondly, the mine mustn’t be developed, as the concentration of the gold in the ore is rather low – 0.8-0.9 grams per ton. It’s a game for the world stock exchange for several people to make money both in Armenia and international mining mafia. The hearings showed that the main people guilty for the migration in Armenia are environmentalists and NGOs, as they don’t create working places in these communities. The community heads and company employees forgot that it’s the Armenia government, who must create working places: when a government can’t perform its obligations, we should apply to the government.

In a normal country such mine can’t be developed, as the company must pay 70% of its incomes to the state. While in Armenia the company pays 27% of its incomes, i.e. like we pay our taxes, but we don’t cause damage to environment and people’s health, don’t take away natural health, which is the property of our future generations. The mine will be developed in the drainage area of Arpa and Vorotan Rivers. The company insists that the water resources won’t be damaged and during the explosions the dust will be spread only in the range of only 100 meters. In any case, wwe will follow the dust and fix the distance of its spread. Meanwhile, Amuslar is famous for its strong winds. People are misled. But I don’t blame Lydian or Geoteam companies, as they make use of our indifference. We together with the government and the National Assembly let the “miners” from foreign countries exploit us.

Under the project, no problems will arise with Arpa-Sevan and Vorotan-Sevan tunnels. Besides “Geoteam” employees, no Armenian specialist will sign a statement, which ensured the safety of the tunnels. It’s easy to write in the EIA that risks are managed. As a matter of fact, these risks are very difficult to be managed, as two recent breakdowns in Canada and in the north of the US showed. In one case, the tailing dump exploded and the wastes spilled out into the river system. In the other case, the cyanide leaked out, which resulted in closing 10 schools, as they don’t know the state of the water resources. While in Armenia they say that risks are manageable, where seismic zone is 9-10 points.

The long-term economic damage caused by Amulsar project hasn’t been assessed as well. The Armenian Government doesn’t require any such assessments: around 600 ha of land areas are taken out of the land fund of Armenia, as they land areas won’t be suitable for use any longer. If to estimate the profit made from these land areas in long-term perspective. Who made such calculations and compared them with the profit, for example, the working places mentioned by the company? The mine ensured working places for 10-15 years, afterwards these land areas are not suitable for further use, where people can’t cultivate anything,” Levon Galstyan said.

''The main risks are not assessed. Nothing is mentioned about the toxic and heavy metals mined out together with the gold. The company only mentions non-organic dust, but this dust contains toxic substances of first category hazard – cadmium, arsenic etc. Nothing is said hoe the project will affect on environment and people. The company must set up a foundation, which must compensate the negative impacts. They don’t hace such a foundation, and no paper says they must set up one,” Inga Zarafyan said.

Gndevaz villager Vahan Mkrtchyan’s question, “How can a person living abroad sign the complaint addressed to IFC against the mine?”

"We received a letter from the Armenian community in Krasnodar, where people said they have land areas and they are not going to sell them. It doesn’t matter whether or not a person lives in Armenia. I have an apricot orchard in Gndevas, and as an owner, I am against the elimination of my organic orchard,” Tehmine Yenoqyan said.

“Only those people complain, whose land areas are not subject to sale,” another Gndevaz villager said. “I have an orchard on 1 ha, and they offer me 300,000 AMD (about 750 USD) for each tree,” Vahan Mkrtchyan said.

“Write it down...yesterday the administration or I don’t remember who asked the question about the cyanide. They said you can say this percent, but you couldn’t say anything. Our people were sitting there, and you, EcoLur, didn’t want us to learn this percentage. Tell us now what’s the percentage of the permissible cyanide?” a gndevaz villager asked Inga Zarafyan.

''During the hearings the project was presented by the company and this question must be answered not by the hearings participant, but the competent companu, which had prepared this project. Yesterday I wanted to learn frim the company, how their EIA complies with the international standards, which should minimize the percentage of the used cyanide, but I didn’t receive any reply. The company must answer your question and not me,” Inga Zarafyan said.